Everything Blue Tongues! Have a question? Just got a BTS and want to introduce yourself? This is the place!
Forum rules
In this forum all are welcome to ask blue tongue skink-related questions, share information, ideas, tips, experiences, and pictures with fellow BTS enthusiasts.
If you are wondering if your BTS is acting normally or might be sick, this is where you can get help with that.
This is also where you can have some FUN while sharing the enjoyment you get from your blueys!
Post Reply
8 posts • Page 1 of 1

Hi! I have really appreciated all of the wonderful feedback I've gotten and it has helped me tremendously. I wanted to update with my enclosure as well as a few new questions. 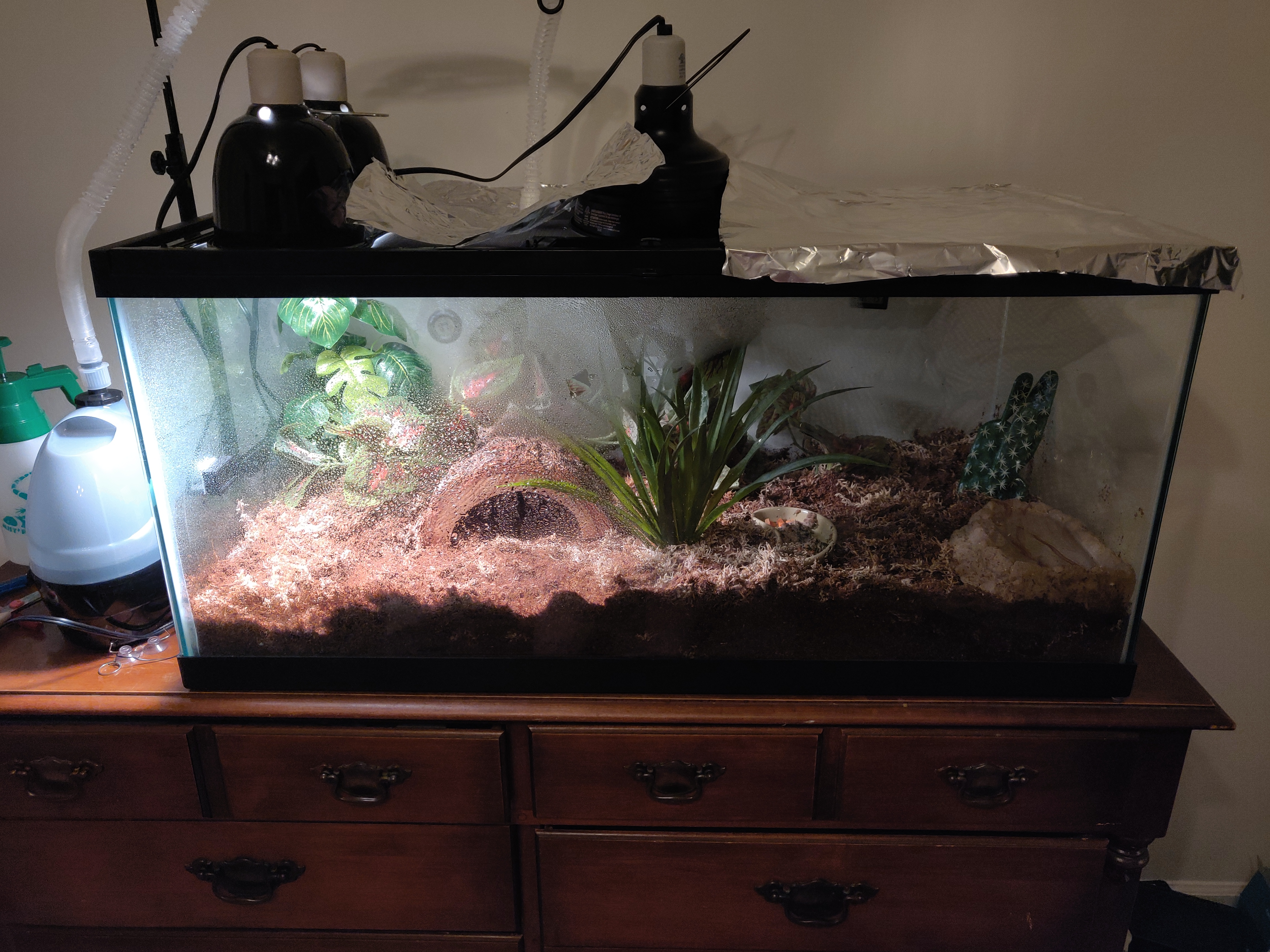 This is the update to the enclosure. Added a fogger, which has helped keep the humidity in the 80%-99% along with misting. No fogger at night, as the humidity goes up by itself. 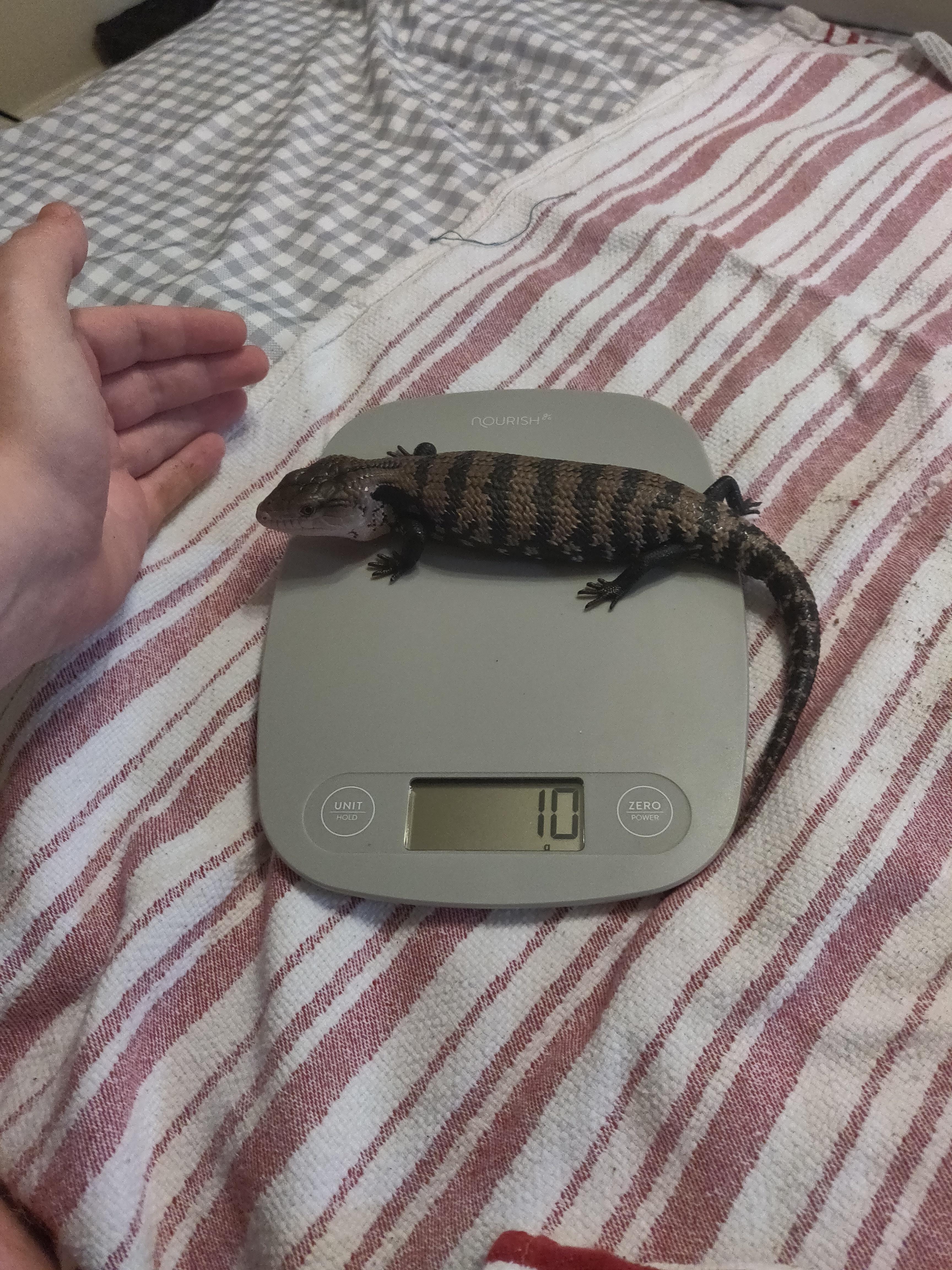 Now, the questions I have are:

1) I've had him for a week tomorrow, and I realize he's new and nervous. I'm paranoid of disturbing him too much, and have had to dig him up every other day for some reason or another. I brought him out yesterday night to weigh him, examine his scales and toes, and I cannot find a baseline to see if that's underweight or not. I offered him food and I don't think he wanted to eat, but licked it. (Video in imgr link). How often should I be weighing/offering him food?

2) He fell asleep while out with me (video)? Is he bruminating at such a young age? He is always burrowed under the warm side, does not sun himself as far as I am aware. I sometimes can tell he's eaten a bit of cat food with greens, a few bites, but is it normal for him to burrow 24/7 right now and I should leave him be until next weigh in? I don't want to take him out to eat if he's going to be bruminating.

He's a sweet boy who huffs and puffs but has never opened his mouth or gotten aggressive, and I just want to do the best by him. As much as I want to SEE him explore the enclosure and eat and soak, I know he's smart and wants to survive and will do it on his own time. I just don't want to ignore something amiss because of inexperience.
Top

1. Na he's not underweight. I rely more on how he looks than what he weighs but it's good that you have a record to go by also. Being that he's so new, I wouldn't be pulling him from the enclosure so frequently to weigh him. It's best to just leave him be and let him become comfortable in his new home. Offer food daily for now. You can start scaling back feedings once the little guy puts some size on him, typically after 6-8 months. Not a big deal if he doesn't eat for now. New skinks sometimes take some time before they are eating consistently for you. Try offering a variety of things to see if any one thing peaks his interest. For young skinks, more protein based offerings like calcium dusted live insects, wet cat food or dog food, or hard boiled eggs are great choices. Leafy greens or vegetables can be offered, but at this stage, sometimes not accepted, which isn't a big deal.

2. Halmaheras typically do not brumate. Burrowing is a common behavior, especially for a new skink. As your skink gets older and acclimates, he may be more inclined to come out in the open.
https://www.facebook.com/Blues-Brothers ... 870974859/
Top

Thank you so much! I'm totally content to let him chill and get used to living in his new home.

I'll keep offering the food up

Do you know an eyeball estimation of his age? They said one - three months. Does this sound right?
Top

Yaaaaay! Great news! Yesterday I was turning over the substrate and dug him up, hand fed inside his enclosure, and he moved around and bumbled around between hides but did not bury himself and slept under the hide.

Since yesterday, Kaiju has been out and about since lights on. I placed a food bowl and he ate nearly all of the cat food, two blueberries, but didn't eat the greens or the banana much. He utilized his basking rock, the outside of the hide enjoying the fog, and other places. I did not attempt to handle or enter his enclosure except to feed and to take food away at the end of the night.

He pooped and peed AND I picked out several large chunks of shed before grabbing the food bowl and turning lights out for the night.

His humidity only drops down to the mid 60s at the lowest when the humidifier needs a change, and is usually high 70s to mid 80s on the regular with spikes to 99%. I really think this is working well and I can't WAIT to share more milestones!

Thank you for all your help.
Top

Great news! Sounds like he is acclimating well. They won't eat greens by themselves (I've never witnessed it) but if you want him to eat them, just chop finely and mix with your dog/cat food.
Top

It can be hard to get them to eat greens without just mixing it in so they're unavoidable. Only time I've ever seen one willingly eat greens is when my skink devoured a plate of green beans. He's never liked them, and never wanted them since then. But I guess he was curious