This Forum is for scientific, medical, pathological, environmental, etc. discussions.
Rules are different for this forum, be sure to read through them inside.
Forum rules
The rules for this forum are different from all the others on this site.
1) Questions regarding sick skinks do not belong here.
2) If you are not sure if your topic is OK here, post it in the General Discussion forum; a moderator can then move it here if appropriate.
3) This forum is for advanced discussions, such as scientific, medical, reproductive, pathological, environmental, etc.
4) PROOF, FACT, and BACK IT UP are three things to keep in mind when posting.
5) Comments need to add to the discussion. “Good job”, “I agree”, or “Nice skink” etc, do not add to the discussion and are not allowed here. If stating an opinion, back it up with what experiences have led to that opinion.
6) The 3 month rule is not in effect; you may post on any thread no matter how old it is.
Post Reply
28 posts

mark_w wrote:I agree with the idea of feeding whole prey food too. I use rat pups fairly often. Or I use rat weaners or medium/large mice which I cut in half. These go down a treat!

Grinderman (Jeff), you can not put whole rodents in a grinder - even I am squeamish at that thought!


Rat puree lol. But its just like cutting it in half so you shouldnt be squeamish.
Merauke Blue Tongue Skink Breeder
https://www.facebook.com/JJReptiles/
Top

I had dumeril's monitors for a while, but stopped keeping them due to space constraints...and the cage(s) were destroyed by an old roommate's dogs. Couldn't afford to fix/get new cages, so I sold them. The information on healthy feeding for carnivorous reptiles was extremely useful though. There's a lot of crossover between healthy feeding of herbivores and carnivores and how to healthfully offer a balance for omnivorous reptiles like blue tongues.
The pic at the bottom is of my beloved Wallace, the one that got me into monitors. Super awesome lizard, adored the crap out of him. Not all monitors have an interactive or outgoing personality; this one did. Super smart, used to get out all the time and scare my roommate. I'd come home and my dog would be hanging out on the stairs with this 4' monitor, and my roommate would be hiding in her bedroom with her dogs.

I don't like feeding chicks; the size chicken chick small enough for a bluey to eat is too young (1 or 2 days) and doesn't really have the nutrients yet that an older chick would. I'm not sure on quail chicks, I'm guessing they'd stay an edible size for a blue tongue longer than chicken chicks.

You don't need to feed rodents often because they are relatively high in fat. In addition, wild skinks rarely have access to rodents - they eat primarily insects because that's what they can catch. They'll readily eat carrion, but how often would a bluey reasonably come across carrion? Baby mice (4 weeks and younger) are relatively high in fat because they're still nursing, which is why you don't want to feed them often. If you can get older rodents and want to feed them regularly, go for it. I fed my gravid female skinky adult mice once a week (leftovers from my baby ball pythons) and it seemed to do her and the babies nothing but good.

If you're able to get access to scientific journals/research articles, you can search for field studies on blue tongue skink diets. I was able to find one a little while ago that found that wild centralian and eastern blueys diets are primarily insects, occasionally carrion, and a significant portion of fruit and seeds. Leafy greens were found in the stomach incidentally - either in the stomach of prey items or coincidentally with larger prey items, such as blades of grass with a large beetle. They found a handful of skinks with carrion in the stomach, but most had insects. Beetles in particular, actually, and insect larvae. Neat stuff! 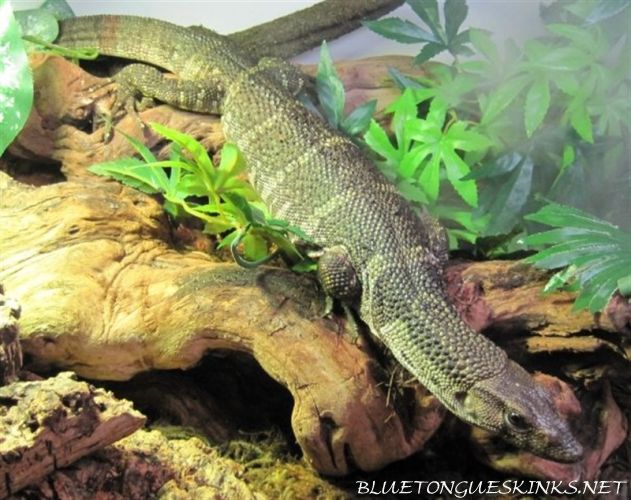 Agreed with hurricanejen. They feed on a variety of insects, and feed especially on beetles/their larvae. Makes sense as that is one group they are likely to run into while rummaging around in the places they do. It seems BTS are fairly hardy animals and do well on a diet quite different from what they eat in the wild. I personally don't see any reason why bluetongues would not thrive on a diet with rodents as the primary source of protein, provided said rodents were not always pinkies.

The most "natural" diet would be a variety of insects that we can offer, greens, etc. but said bluey would likely require calcium/vitamin supplements as well. Considering BTS predilection for nonmoving prey their is no need to feed them like this.

The fact that BTS consumed seeds/small berries I find somewhat surprising. I wonder if captive animals would benefit from the roughage provided by some pulpy fruit(like passion/cactus fruit or blackberries, for example). Anyone in bluetongueland have photos of wild skink feces?
Top

What about crayfish? They're good for monitors and easy to catch if you have a trap. I dont think they eat them in the wild, but they could be very healthy

My Dumeril's would eat crayfish and whole shrimp, but my blueys didn't like it as much. They tried some of the canned red shrimp for turtles that ZooMed makes but didn't eat a ton of it.
I used to be cool.
Top

SapphireTigress wrote:RK, that is so gross! good idea, but gross

haha i agree, gross, but a great idea

Re: Thoughts on whole vertebrae food items for Tiliqua

rodents are a good thing to add to there diet,i wouldnt use them exclusivly but a few a month would be great,especially if u feed a more vege based diet

in the wild they would come across nests of rodents and probably consume any small enough,also the are commonly eating road kill,ive even seen a wild blotchy consuming dried up dog poo,though not something ill replicate with my captives,lol,though with 3 dogs id have ample supply,lol
Top

Re: Thoughts on whole vertebrae food items for Tiliqua

Anyway not sure of why the focus on rodents - other than perhaps convenience if you have them on hand cos you are feeding snakes. After all they are just a package of meat, fat and bone like any meat and bone source. In reality probably inferior to giving bone meal due to the relative proportions of meat to bone. I wouldn't be worried about the fat content for occasional feeding unless the skink is already on the heavy side. Naturally their prey items are high in saturated fats, invertebrate larvae and moths are typically 13% + and make up a large part of their diet. It should be a matter of balance. This probably flies in the face of advice that you may get from others but they are not humans, they are reptiles. The main problems are getting the Ca:P ratios badly wrong for extended periods.

There is always the potential to inject food items with a slurry of Ca powder.
If you wait, all that happens is that you get older. M. Andretti
Top
Post Reply
28 posts