Everything Blue Tongues! Have a question? Just got a BTS and want to introduce yourself? This is the place!
Forum rules
In this forum all are welcome to ask blue tongue skink-related questions, share information, ideas, tips, experiences, and pictures with fellow BTS enthusiasts.
If you are wondering if your BTS is acting normally or might be sick, this is where you can get help with that.
This is also where you can have some FUN while sharing the enjoyment you get from your blueys!
Post Reply
9 posts • Page 1 of 1

She doesn't seem to get better or worse really.
pics of foot, both sides of face, and her whole body. 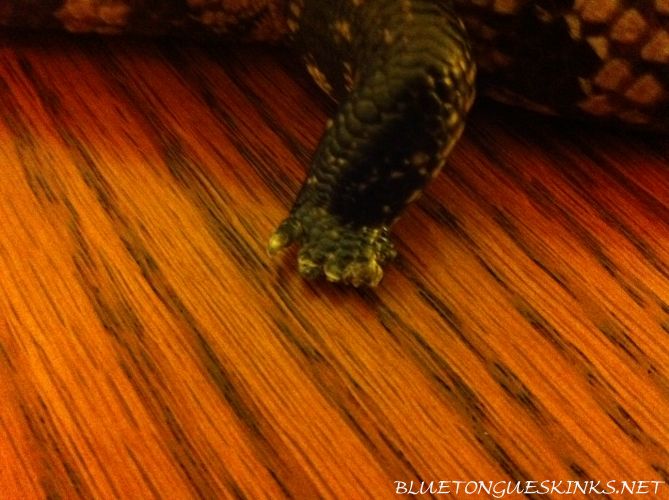 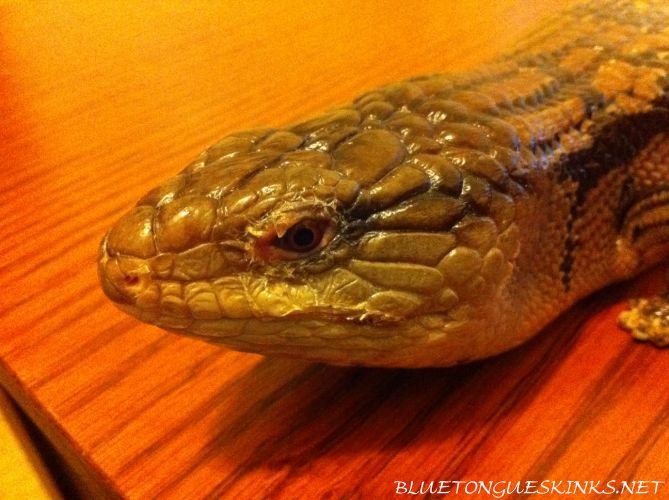 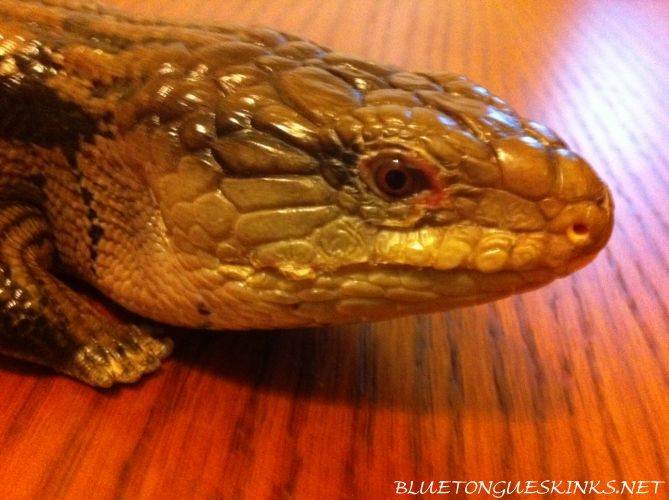 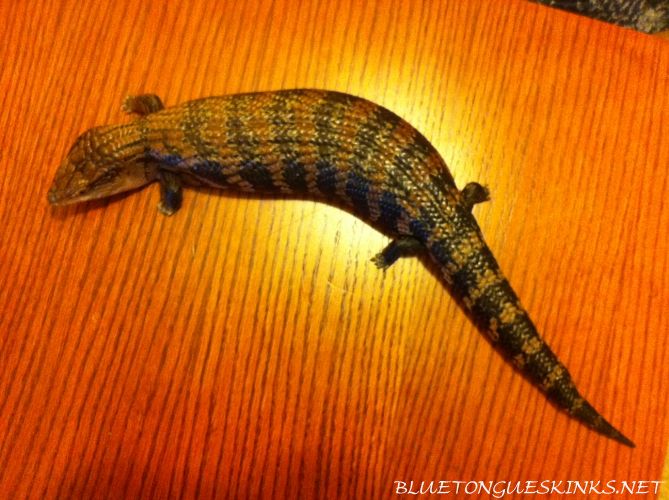 So yeah, nothing much has changed
Clothes make the man. Naked people have little or no influence on society.
-Mark Twain
Top

I have a skink whose eyes would look very similar the next time you go to the vet ask about bactran zinc and polymyxin b sulfate ophthalmic ointment usp
Merauke Blue Tongue Skink Breeder
https://www.facebook.com/JJReptiles/
Top

So sorry to see the issues are still present. It seems like some gigas spp. have these strange toe / eye issues that aren't easy to cure.

Do the eyes close up overnight ever? Does a shed appear to fix most of this, only to have it return over the next couple weeks?

Sorry - I can't remember the entire story... what have you and your vet tried so far?
Top

Katrina wrote:So sorry to see the issues are still present. It seems like some gigas spp. have these strange toe / eye issues that aren't easy to cure.

Do the eyes close up overnight ever? Does a shed appear to fix most of this, only to have it return over the next couple weeks?

Sorry - I can't remember the entire story... what have you and your vet tried so far?

just antibiotics and they didn't make much a difference. The problem is that parents aren't on board with spending any more money on another vet visit so unless she gets worse she is probably not going to get any more treatment.

When she sheds she gets lethargic and doesn't move much, and the crust builds up on her eyes and mouth. Then after the shed she returns to normal.
Clothes make the man. Naked people have little or no influence on society.

Hey, Susann with identical Joey here. (Although, Olivia has gotten a bit chunkier since the last time I saw pictures, not so identical anymore.)

I'm sorry to hear Olivia is still fighting this nasty stuff. Joey has actually had his longest stretch of doing pretty well in over a year.

Sorry I haven't been around on the forum, I've actually been out of the country for nearly 2 months. xxmonitorlizardxx pointed me to your thread.

Olivia's eyes, mouth, and digits seem to still have the same issues as Joey's do. Joey's problems come and go. Has been very frustrating! Just as we've thought he's gotten a bit better, it flares up again.
If there's interest, I can post pictures of the flare-ups; I can't remember if I already sent you those in a PM...?

As I said, he's had a little over two months of being better. BETTER, not GOOD. And the only thing that coincided with this improvement and the last, was the vet giving him a vitamin A shot, an antibiotic shot, plus a steroid shot. Honestly, I can't remember if he got an antibiotic shot the time before, but he did this time.
I have found, much as you have, that the antibiotic alone does nothing. Or, not much. Certainly not enough. We have had Joey on three different antibiotics, back to back. One of them I had to inject for about a month. No improvement, or minimal at best.
The reason for all three shots this time was the amount of inflammation in eyes and feet. Vitamin A -because we think that this is the underlying issue here, a seemingly poor ability for him to absorb this through natural means. Antibiotic -because we wanted to boost his healing incase he was fighting an infection. Steroid -because he had so much inflammation, eyes very inflamed, feet very puffy and cracked.

Here's what's up right now: Joey's eyes crust over every night, but are not red, nor have they been since the last set of shots. His mouth gets that hard crust that I have to soak and pick off. He gets bubbles at the corners of his mouth when his tongue gets going, just like you described Olivia's. But, unfortunately, his fingers and toes are still puffing up, getting black, and falling off. Yes, it's quite gross.
But, over-all, his feet aren't as inflamed as they have been in the past. Now we're talking one toe at a time, instead of whole feet being puffy, cracked and bleeding.
The biggest improvement, however, is his energy. Before, he hardly ever even moved. Now, he's up and checking things out. Before, when I laid him in the tub to soak, I had to put a folded washcloth under his head in order to keep his nose above water. Now, he keeps traipsing around the tub, walking like an alligator trying to get his tummy off the bottom--it's the cutest thing EVER!!

I recommend another vet-visit. I am sorry. I know you didn't count on these problems when you got Olivia, but none the less, you have them. At the very least, call your vet and ask what he/she thinks of the shots I described. And also ask about ointment for her eyes. She needs something. You are welcome to have your vet contact the vet that has cared for Joey,
Dr. Orr
Creekside Animal Hospital
12720 Pony Express Rd
Draper, UT 84020
(801) 565-1263

Olivia seems a bit dry in the pictures. Do you still have her on shavings as substrate? As an immediate aid, I would place her on towels (paper or regular) instead. Up the temperature a bit and keep the temperature up around the clock. Mist, mist, mist. Keep the humidity a bit higher, spray her down at least twice a day. Put eye-drops in her eyes often. (I like the oilier ones, like Refresh Optive.) Soak her in a sterile tub often, every day if you can. After each soak rub Polysporin on her feet.

Again, I'm sorry, but I think you need to discuss all of this with an experienced herp-vet.
Best of luck to you and especially to Olivia. Keep us updated, and absolutely know I am here suffering with the two of you, and will do all in my power to help and support you guys.
1.0 Merauke
Bred Meraukes for years, now I get to just enjoy my BIG boy Milo!
Sue Bee on FB.
Top

I will probably change her over to paper towels today and one thing that I have noticed with olivia is that the mouth crust is that it is always red and irritated underneath it, could picking them off be like picking a scab where it just slows the healing? She is quite active and her feet cant get any worse and they don't seem to be puffy or cracked at all. And I wish that I could go to the vet and get all of this medicine but my parents wont spend anymore money.
Clothes make the man. Naked people have little or no influence on society.

Have your parents read the posts on your thread from others? Just wondering if that may help them better understand how important it is to get to a vet. Just and idea, and hope you and your skinkers are feeling better soon.
You Only Live Once.

Hopeful_Herper wrote: the mouth crust is always red and irritated underneath it, could picking them off be like picking a scab where it just slows the healing?

Absolutely it is like picking a scab. Same thing happens with Joey, there's a red sore under the crust, IF I pick them when they are big, or not soaked enough. I try to catch them right when they first start showing up. I take a Q-tip, dip it in water or saline solution, and soak, soak, soak the scab/crust.

If it is very thin I can pick it off without soaking. Otherwise I soak, and try to RUB the scabs off with the Q-tip. Once they (the BIG, thick ones) are soaked all the way through I can pick the slimey scabby thingie off without leaving the red sore on the lip.
1.0 Merauke
Bred Meraukes for years, now I get to just enjoy my BIG boy Milo!
Sue Bee on FB.
Top
Post Reply
9 posts • Page 1 of 1

Users browsing this forum: No registered users and 3 guests