Everything Blue Tongues! Have a question? Just got a BTS and want to introduce yourself? This is the place!
Forum rules
In this forum all are welcome to ask blue tongue skink-related questions, share information, ideas, tips, experiences, and pictures with fellow BTS enthusiasts.
If you are wondering if your BTS is acting normally or might be sick, this is where you can get help with that.
This is also where you can have some FUN while sharing the enjoyment you get from your blueys!
Post Reply
16 posts • Page 1 of 1

At like 2am last night I found my bluey had a noticeable dip from the front of the body going down towards the back. I check on him every day and this seems to be a very sudden change/injury.
He moves fine, legs are still responsive, and doesn't seem to be in any noticeable pain.
He also pooped some time last night before I found him, but I don't know if it was before or after whatever is going on with his spine/back.

And yes he does look the same even on a flat surface, it isn't just the bed.
His backend feels squishy whereas the front is more solid.

Any idea what this is? I have him booked in at a vet tomorrow but I'm concerned in the meantime. 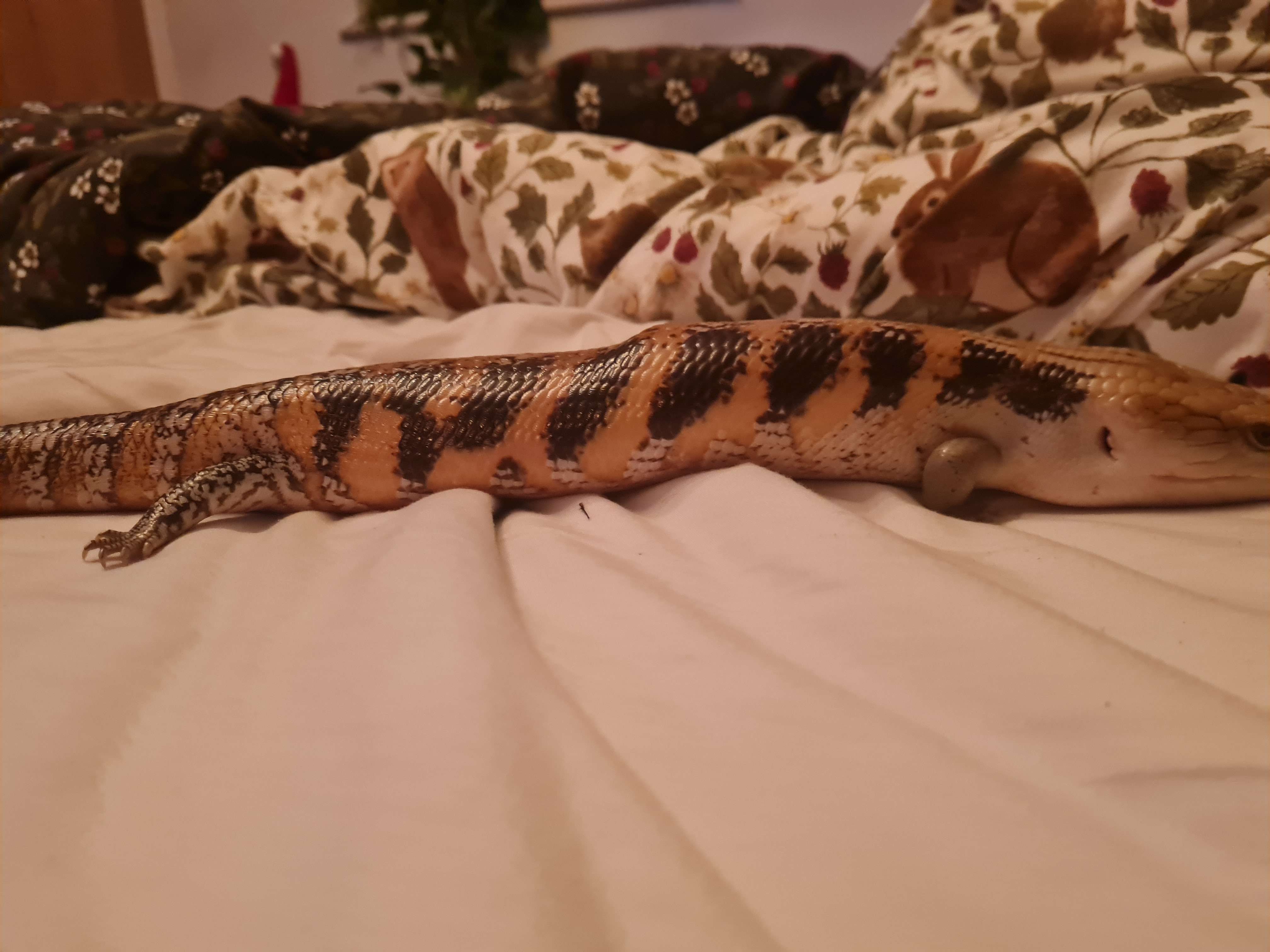 MBD comes to mind but you'd probably have noticed that over time. It's possible it could be an injury from "glass surfing" if that's something you notice your skink doing. Best bet as you said is to have a vet do some imaging.
https://www.facebook.com/Blues-Brothers ... 870974859/
Top

I feed him on a [edit correct] wet dog food grain free chicken, sometimes bluey buffet, morio worms, banana, blueberries.
I use calcium, calcium d3 and a multivitamin supplement and have a UVB lamp setup, my first concern was MBD which is why I hurried here.

Any additional advice on diet would be amazing as the original sellers were quite limited in their explanation.

As for the glass surfing he's in a wooden vivarium with only a glass front, I've never witnessed him do any of this and he's in my room (i'm a pc gamer and can hear/see him do anything for the majority of the day), but obviously there's the offchance he did?

Diet seems fine. With everything you stated, MBD shouldn't be an issue. Typically when you see these types of things, its birth defects but pretty rare for it to seemingly pop up overnight in an otherwise healthy appearing skink. I've heard of spinal deformities occurring due to excess climbing on the walls so perhaps the vet can help figure this one out.
https://www.facebook.com/Blues-Brothers ... 870974859/
Top

mb606587 wrote:Diet seems fine. With everything you stated, MBD shouldn't be an issue. Typically when you see these types of things, its birth defects but pretty rare for it to seemingly pop up overnight in an otherwise healthy appearing skink. I've heard of spinal deformities occurring due to excess climbing on the walls so perhaps the vet can help figure this one out.

Yeah he's already 6+ years old, when I got him they said he was 6, so I currently think it's some sort of injury.
Making the almost 2 hour round trip to the vets tomorrow so fingers crossed it's nothing too serious.
Top

Hi there, what did you find out at the vet
Top

Janella wrote:Hi there, what did you find out at the vet

I'm due to see the vet at 4.15pm today and it's 2pm at the moment.
In the mean time, over night the difference between the raised part and lower of the back has reduced, which I'm hoping is a good sign as there is slight improvement visually.

I am still taking him to the vet obviously and will update on the results when I get home. It's gonna be a few hours of driving!
Top

Janella wrote:Hi there, what did you find out at the vet

Very long story short, xrays showed he has somehow broken his spine. The vet explained a lot to me and after an hour drive and almost an hour wait my head was fried, but he believes it's some sort of 'infection/disease' (a lot of words were thrown around) that has "eaten away at the bone" and it's given way. He confirmed that the calcium in his other bones were absolutely perfect, so sadly it's something that just kind of 'happened' as far as my understanding goes. I was told there wasn't anything I could have done to prevent it apparently which absolutely sucks.

He's on pain relief and antibotic injections, and i'm going back next week to get him checked up on.

Hopefully this post can serve some good to others if they find something like this has happened to their skink.
Top

Wowzer! That is crazy. I have never heard of such a thing. So what is the long term prognosis of this little guy?
Top

Janella wrote:Wowzer! That is crazy. I have never heard of such a thing. So what is the long term prognosis of this little guy?

As of right now I'm just giving him pain relief injections every 24 hours, antibotics every 3 days and closely monitoring him, making sure he can still feel/move his back legs and overall rear end.
I have a checkup appointment on Thursday to see if he is healing. The vet said it would be 50/50 if he would recover or not.
Top

I've never heard of such a thing either. You mentioned he was 6 when you got him? Perhaps his previous care was not as diligent. How long have you had him? Previous diet could be a factor.
Top

splashy07 wrote:I've never heard of such a thing either. You mentioned he was 6 when you got him? Perhaps his previous care was not as diligent. How long have you had him? Previous diet could be a factor.

I bought him from a reputable shop, he was in seemingly perfect condition when I bought him. And the vet commented that other than the horrible visible dip in his spine there is nothing else visibly wrong with him.
The vet did mention that he doesn't believe it's some sort of dietary issue, as the xray showed the rest of his bones in perfect condition and their 'calcium levels' were really good apparently - something to do with being able to see his toes clearly in the xray being super good.

We went over my feeding with him and he saw no issues there either, and with the lack of heavy objects to fall and break his back the conclusion of it being an internal disease/infection issue "eating at the bone" was discussed. The vet seemed to have specific experience with his happening in other reptiles he has treated before, he did go into a lot of detail but at this point I had heard 5 different potential causes explained in detail and my brain felt like it was about to explode.
We have not 100% confirmed anything, but the damage is obviously the break of the spine so we're giving antibotics as a preventative measure rather than "diagnosed and treating", as if his guess is correct we're getting in as early as possible with the treatment to prevent more damage to his bones. Meanwhile trying to heal his spine.

As of today he can still feel his feet, and move them. He has eaten banana but nothing else, and has yet to poop (on the day of the xray we confirmed food was in his colon, so we're waiting to see if he can still poop).
Top

I have cancelled his appointment for today after talking to the vet over the phone as it has only been a week since the vet visit (I don't want to make a 3 hour trip just for them to say "lets keep an eye on him and continue the medication you already have for him at home") and he is eating, pooping, moving around and still can feel/move his legs and tail. I check on him every few hours to make sure he can feel his legs.

I have rebooked for the 8th, as this was the original suggested recheck date but I wanted to be extra careful and booked an early appointment in case he went downhill.
It is inevitable that I will have him xrayed again to see if he is recovering, but for now there is good signs he could be okay.
Top

Prayers your skink keeps moving in the right directions of health! Keep up the great care you are providing.
Top
Post Reply
16 posts • Page 1 of 1

Users browsing this forum: No registered users and 41 guests